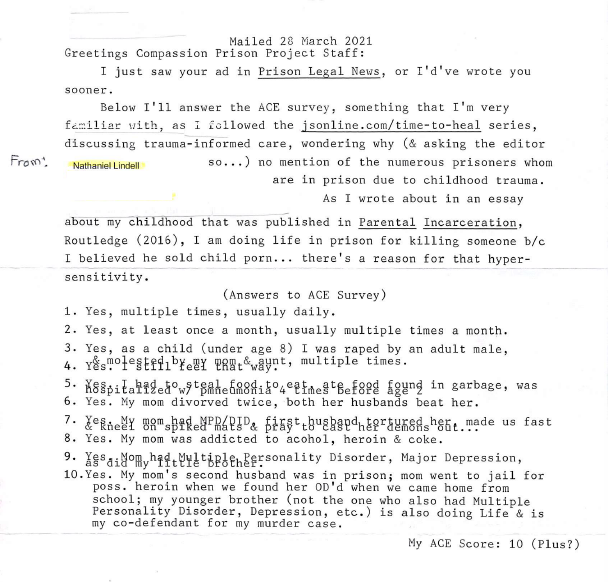 "...there's a reason for that hyper-sensitivity."

1. Did a parent or other adult in the household often or very often… Swear at you, insult you, put you down, or humiliate you? or Act in a way that made you afraid that you might be physically hurt?

2. Did a parent or other adult in the household often or very often… Push, grab, slap, or throw something at you? or Ever hit you so hard that you had marks or were injured?

A: Yes, at least once a month, usually multiple times a month.

A: Yes, as a child (under age 8) I was raped by an adult male,& molested by my mom and aunt, multiple times.

4. Did you often or very often feel that … No one in your family loved you or thought you were important or special? or Your family didn’t look out for each other, feel close to each other, or support each other?

A: Yes. I still feel that way.

5. Did you often or very often feel that … You didn’t have enough to eat, had to wear dirty clothes, and had no one to protect you? or Your parents were too drunk or high to take care of you or take you to the doctor if you needed it?

A: Yes. I had to steal food to eat, ate food found in garbage, was hospitalized w/pneumonia 4 times before age 2.

6. Were your parents ever separated or divorced?

A: Yes. My mom divorced twice, both her husbands beat her.

7. Was your mother or stepmother:
Often or very often pushed, grabbed, slapped, or had something thrown at her? or Sometimes, often, or very often kicked, bitten, hit with a fist, or hit with something hard? or Ever repeatedly hit over at least a few minutes or threatened with a gun or knife?

A: Yes. My mom had MPD/DID, first husband tortured her, made us fast& kneel on spiked mats & pray to cast her demons out…

8. Did you live with anyone who was a problem drinker or alcoholic, or who used street drugs?

A: Yes. My mom was addicted to alcohol, heroin & coke.

A: Yes. Mom had Multiple Personality Disorder, Major Depression,as did my little brother.

10. Did a household member go to prison?

A: Yes. My mom’s second husband was in prison; mom went to jail for poss. heroin when we found her OD’d when we came home from school; my younger brother (not the one who also had Multiple Personality Disorder, Depression, etc.) is also doing Life & is my co-defendant for my murder case.

Portrait of a Human: Ezra Williams

The journey of compassion with Dr. James Doty