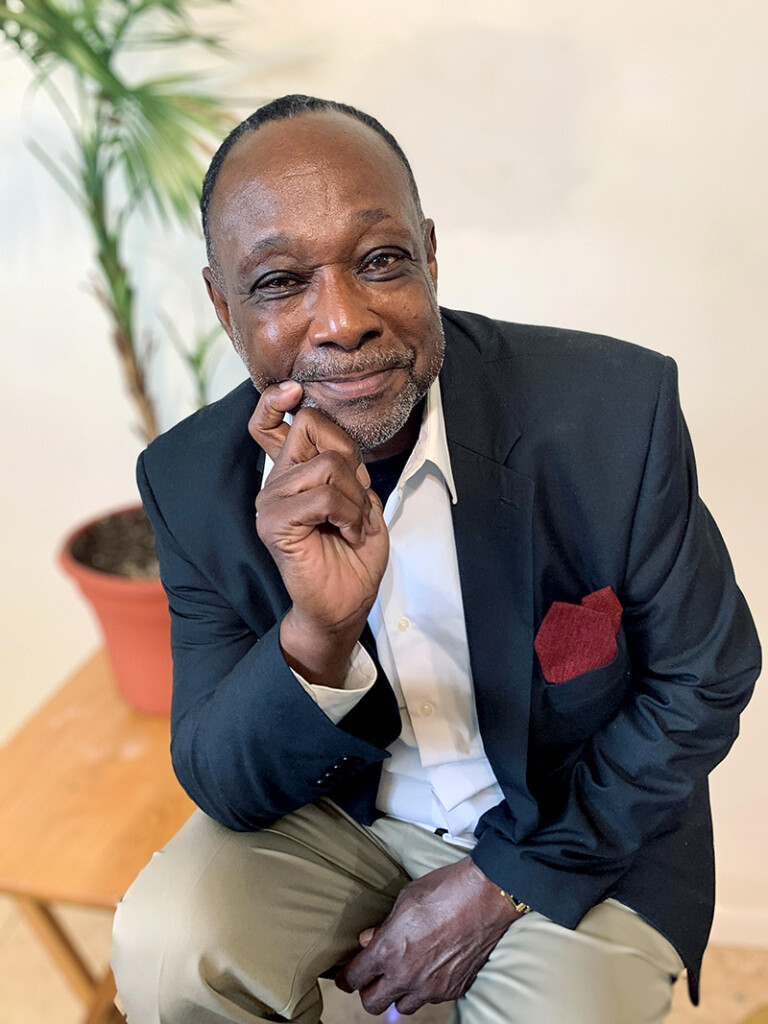 Let us introduce you to Sylvester Shockley, affectionately known by our core team as Vessey. Vessey is CPP’s Strategic Advisor who carries a unique wealth of experience. His life has unfolded like a poignant novel, full of hardships and trauma, grace and hope. But there’s something beyond this story that makes Vessey special, that transcends the diamond-in-the-rough returning citizen tales. Maybe it’s the fact that he spent nearly five decades in prison, yet has the gentlest demeanor of anyone on our team. It could be because Vessey often sits quietly during our Zoom meetings, taking it all in like a wise sage. Then peaceably, but confidently, with a spirit reminiscent of Sidney Poitier mixed with George Burns’s “God”, speaks his mind. Vessey’s words never fail to be intelligent, thought-provoking, and perfectly timed… often a reminder to be gentle in our approach. Very often, a reminder to keep compassion for our fellow humans uppermost in all of our decision making.

Recently, I posed a few questions to Vessey. My hope is that you’ll find his observations to be insightful and also the consummate example of a Portrait of a Human.

How long were you in prison?

My name is Sylvester Shockley, I’m 71 and was in prison for most of my life-approximately 50 years.  Perhaps it might be more than that if I really add it all up.  Approximately four years were spent in juvenile custody and the rest in adult prisons.

What was your childhood like, and do you know your ACE (adverse childhood experiences) score?

Growing up, my childhood was very troubling.  I had a very deep resentment towards my father as a result of the abusive ways in which he treated my mother, my siblings and especially me.  I remember that as a child, I was playing with matches, and accidentally set a hamper on fire.  I was able to put the fire out but when my dad came home, to teach me a lesson not to play with matches, he took the matches and burned my fingers.  Also, in my childhood, I had recurring terrifying dreams and nightmares of falling off cliffs, and monsters trying to kill me.  I would wake up just before I would hit the ground and before the monsters would catch me.

Between the ages of five through eleven, I was sexually abused by two adult males and one adult female on three separate occasions. Furthermore, I had a very serious stuttering problem (still today I have problems in pronouncing certain words).  I was shy around people and the only time I felt comfortable and confident was when I was playing sports, or when I was by myself.  I always felt unwanted by my family, and that no one really cared for me.  By the time I was ten, I was stealing and getting into all kinds of trouble.  I was arrested several times and was sent to holding centers for youth until my mother would come and get me or until I went to court.  By the age of 12, the Family Court declared me a juvenile delinquent and sent me to Ferris School for Boys.  By the time I was released from Ferris I was filled with so much anger and rage that I didn’t care what would happen to me.  I made the decision that doing wrong was better than doing right, and that I would never again allow somebody to take advantage of me without getting some back.  I just wanted people to feel the same way I was feeling.  So, it made no difference how I would hurt people.  If I could get something financial out of it, all the better.  When I turned 17, I tried to rob a store in the neighborhood.  The owner pulled a pistol and we got into a tussle.  While we were tussling, the gun went off accidentally killing the owner.  I panicked and fled the store.  Causing the death of the owner brought about a very serious breach within my soul.  It was as if I had experienced the same kind of fear and dread that Adam and Eve had experienced in the garden of Eden when they had violated and disobeyed God law.  When I was sentenced for the crime, I wanted to somehow express my remorse and regret, but the hardness of my heart wouldn’t allow me to express how I really felt.

What happened to you while in prison that you found transformative or enlightening?

In prison as a young guy, I was looked up to because I had killed someone. I felt wanted and accepted.  Also, in prison you couldn’t appear weak.  So, in my assimilation to prison life, I made it very clear that there was a price to pay messing with me.  But after several times in and out of prison trying to live up to that reputation, my heart began to soften.  While in prison, before I went back to jail for the last time, I was experiencing some intense emotions and supernatural experiences that were beyond my understanding that shook me to my core. My conscience was truly convicting me about all the bad things I had done in life.  I knew that if I didn’t do anything about it, I would be lost for all eternity.  When I informed the prison officials and mental health officials about the intensity of my emotional pain and the disconcerting supernatural experience, they seemed to be at a loss in helping me, (as I think about it, perhaps the reason I did not receive any help or support from prison officials was because of the bad reputation that I had acquired).  I was left to my own device in figuring out what was going on with me. Finally, I concluded, I had no other choice but to turn to God for answers.  Through my faith in God, I was able to clear my conscience of all the bad things I had done and started to make some changes in my life for good. However, there were a few deep dark secrets that I was unwilling to face and deal with.  Subsequently, when I was released from prison before this time, it was my deepest desire to be a positive influence on my family, and to be a law-abiding citizen. However, because I failed to deal with those deep dark secrets, regrettably, I yielded to my base self and committed another crime. You might not understand when I say this, but going back to prison was the best thing for me at that time.  I was unfit to be in society, and I knew I needed help.  Once I went back to prison, I proposed in my heart to seek the help that I needed and to resolve all the issues that kept bringing me back to prison.  The healing process was very difficult, but I dealt with the man in the mirror and learned the principles to live right and treat other people right as well.  By participating in groups, one-on-one counseling, private time with myself, and especially spending time in the Word of God helped me to transform my thinking.  I accept that there is no substitute for treating people right and doing right.  Today and every day, I’m still learning how to continuously be a man of respect, honor, integrity, transparency, compassion and truth.  My past no longer defines who I am.  I have decided not to be the problem anymore, but to be accountable and responsible for finding the right solution to the problem.

Was returning to society difficult? What would have made the experience better?

Being released in March 2019 after spending 38 years incarcerated, was shocking to say the least.   I ran into a lot of subtle discrimination and roadblocks that delayed my maturation back into the community.  But I also have received a lot of support from people in the community in my adjustment.   Nevertheless, it seems to me that some folks encouraged me to pull myself up by the bootstraps yet holding their foot on my neck and holding my past against me all at the same time. However, I will not allow people ever again to control me or to hold me back from being the person I’ve always wanted to be, and succeeding in making a difference.  I’m grateful for all the support that I have received.  I think the reason for this is, I no longer present myself as a grizzly bear but as a teddy bear.  When you begin thinking well of yourself, people are more willing to think well of you too. That’s part of the reason I now have a good job working for the State of Delaware as a case manager for returning citizens, have a bank account and for the first time, own my own home (after being out of prison for only two and half years). I find that I’m meeting with success in my adjustment back to the community.  I’m actually enjoying life the way I wanted it to be for the first time.  I’m no longer concerned about my past catching up to me, because I’m too caught in my present and preparing myself for my future. I can see it’s getting brighter and better every day.

What advice would you offer to young people?

The advice that I would give to the young people is honor, obey and respect your parents. They can help you navigate the pitfalls. Also, treat others the way you want to be treated. Believe you me, we do reap what we sow.

What would you like to see Compassion Prison Project accomplish in the future?

My hope for CPP in 2022, is to see all prisons in America be trauma informed, and to know their ACE score and that CPP be well funded to accomplish those goals. Thanks to CPP I now know my ACE score is (7).  Knowing my ACE score helps me to understand why I feel the way I do and then to do something about those feelings in a positive way.

27 February 2021Portrait of a HumanSolitary Confinement

A Compassionate Inquiry with Gabor Maté