Portrait of a Human 15 December 2020
ShareFacebookTwitterTumblrPinterest 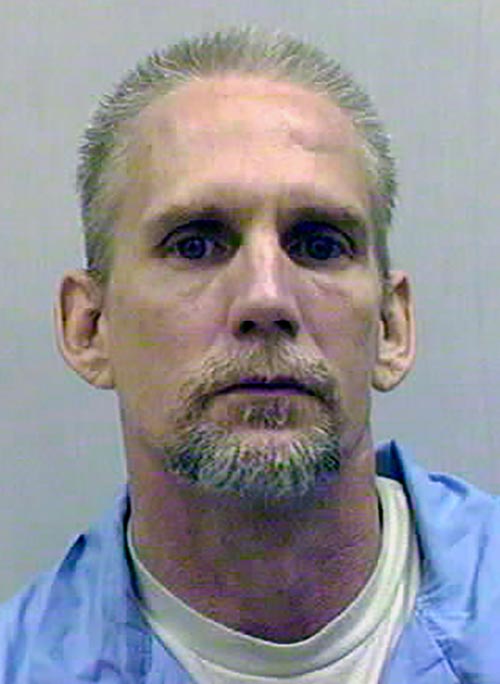 Wesley Purkey was executed by the US Federal Government on July 16, 2020. He had an ACE score of 10.

Here are some of the pieces he wrote before his execution... 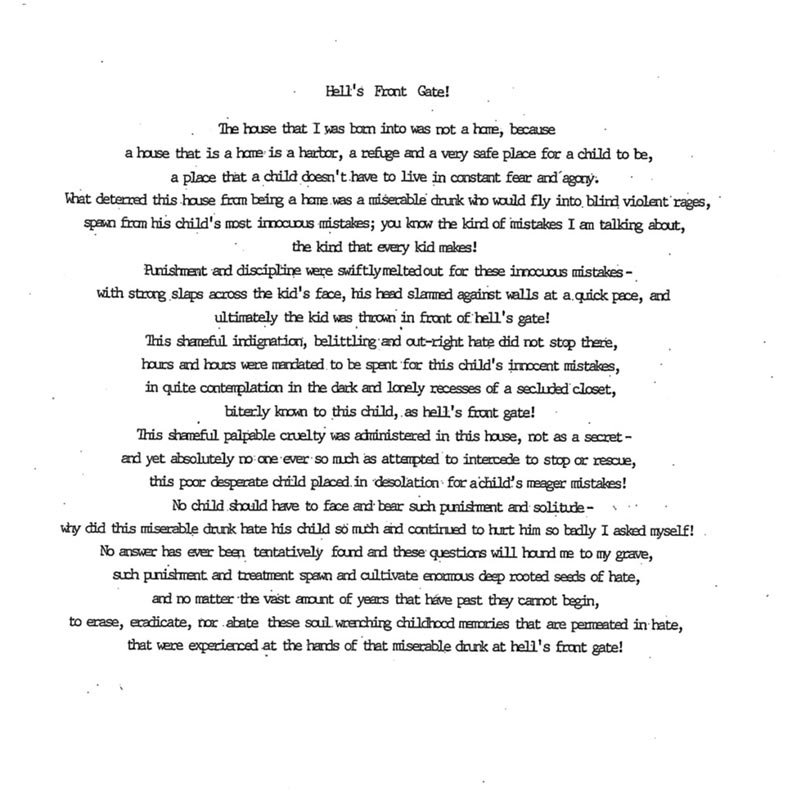 The house that I was born into was not home, because a house that is a home is a harbor, a refuge and a very safe place for a child to be, a place that a child doesn’t have to live constant fear and agony. What deterred this house from being a home was a miserable drunk who would fly into blind violent rages, spawn from his child’s most innocuous mistakes; you know the kind of mistakes I am talking about, the kind that every kid makes! Punishment and discipline were swiftly meted out for these innocuous mistakes – with strong slaps across the kid’s face, his head slammed against walls at a quick pace, and ultimately the kid was thrown in front of hell’s gate! This shameful indignation, belittling and out-right hate did not stop there, Hours and hours were mandated to be spent for this child’s innocent mistakes, in quite contemplation in the dark and lonely recesses of a secluded closet, bitterly know to this child, as hell’s front gate! This shameful palpable cruelty was administered in this house, not as a secret – and yet absolutely no one ever so much attempted to intercede to stop or rescue, this poor desperate child placed in desolation for a child’s meager mistakes! No child should have to face and bear such punishment and solitude – why did this miserable drunk hate his child so much and continued to hurt him so badly I asked myself! No answer has ever been tentatively found and these questions will hound me to my grave, such punishment and treatment spawn and cultivate enormous deep rooted seeds of hate, and no matter the vast amount of years that have past they cannot begin, to erase, eradicate, nor abate these soul wrenching childhood memories that are permeated in hate, that were experienced at the hands of that miserable drunk at hell’s front gates!

"Without a doubt, love is the best antidote for hatred and goodwill for anger; the presence of one implies the absence of the other. In saying as much, when unconditional love is mustered in a person's heart in lieu of hatred, then all individuals on the face of the earth will receive the love, respect and forgiveness that is so deserving based on a person's dignity in this world." 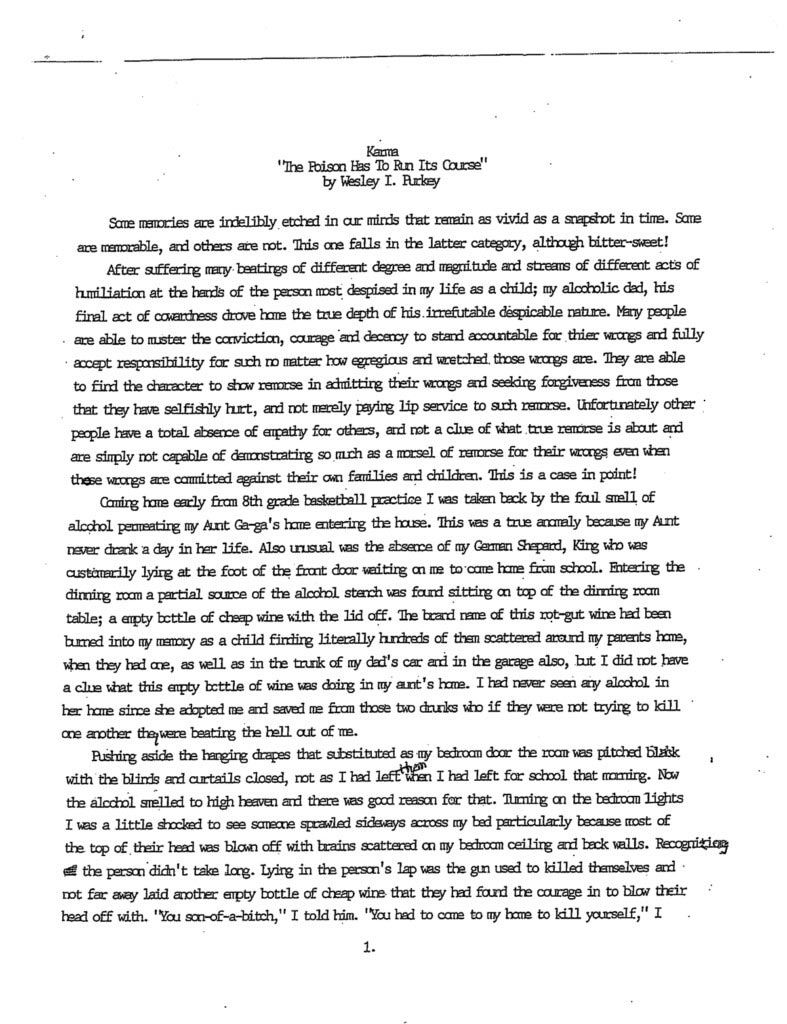 Karma “The Poison Has to Run Its Course”

Some memories are indelibly etched in our minds that remain as vivid as a snapshot in time.  Some are memorable, and others are not. This one falls in the latter category, although bitter-sweet!

After suffering many beatings of different degree and magnitude and streams of different acts of humiliation at the hands of the person most despised in my life as a child; my alcoholic dad, his final act of cowardness drove home the true depth of his irrefutable despicable nature.  Many people are able to muster the conviction, courage and decency to stand accountable for their wrongs and fully accept responsibility for such no matter how egregious and wretched those wrongs are.  They are able to find the character to show remorse in admitting their wrongs and seeking forgiveness from those that they have selfishly hurt and not merely paying lip service to such remorse.  Unfortunately other people have a total absence of empathy for others, and not a clue of what true remorse is about and are simply not capable of demonstrating so much as a morsel of remorse for their wrongs even when these wrongs are committed against their own families and children.  This is a case in point!

Coming home early from 8th grade basketball practice I was taken back by the foul smell of alcohol permeating my Aunt Ga-Ga’s home entering the house.  This was a true anomaly because my Aunt never drank a day in her life.  Also unusual was the absence of my German Shepard, King who was customarily lying at the foot of the front door waiting on me to come home from school.  Entering the dining room a partial source of the alcohol stench was found sitting on top of the dining room table; an empty bottle of cheap wine with the lid off.  The brand name of this rot-gut wine had been burned into my memory as a child finding literally hundreds of them scattered around my parents home, when they had one, as well as in the trunk of my dad’s car and in the garage also, but I did not have a clue what this empty bottle of wine was doing in my aunt’s home.  I had never seen any alcohol in her home since she adopted me and saved me from those two drunks who if they were not trying to kill one another they were beating the hell out of me.

Pushing aside the hanging drapes that substituted as my bedroom door the room was pitched black with blinds and curtails closed, not as I had left them I had left for school that morning.  Now the alcohol smelled to high heaven and there was good reason for that.  Turning on the bedroom lights I was a little shocked to see someone sprawled sideways across my bed particularly because most of the top of their head was blown off with brains scattered on my bedroom ceiling and back walls.  Recognizing the person didn’t take long.  Lying in the person’s lap was the gun used to killed themselves and not far away laid another empty bottle of cheap wine that they had found courage in to blow their head off with.  “You son-of-a-bitch,” I told him.  “You had to come to my home and kill yourself,” I said with enormous outrage.  “Why didn’t you do this fourteen years ago and saved everyone the misery you put them through,” I repeated to myself time and time again.

The police found my friend and ally, King in the back yard where I had chained him up that morning and accidentally forgot to bring him back in the house when I was rushing to get to school.  In that same rush I had forgot to lock the back door giving the unwelcome drunk his fortuitous way in the house.  I bet King was raising kane when the unwelcome dunk entered the house, but he was physically incapable of addressing the problem or he would have.  The only emotions that I have ever felt witnessing that guy, my dad sprawled across my bed with his brains blown out is disgust, hate, bitterness and perhaps pity, but nothing that could remotely be considered as sympathy.  Not even close!  All poisons have to run their course or they will destroy the person clinging to them.  Unfortunately that is easier said than done because here even after a half of a century that poison is toxic in my life. 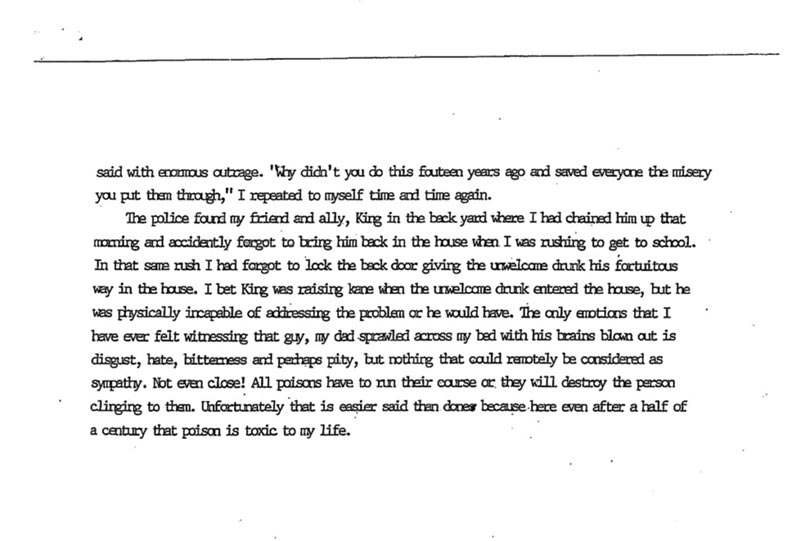 “I deeply regret the pain and suffering I’ve caused Jennifer’s [Long] family. This sanitized murder really does not serve no purpose whatsoever.”