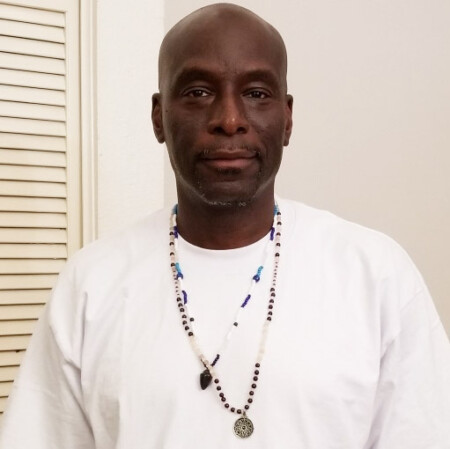 Villond Cook spent 32 years, 2 months, and 3 days in prison, most of which were in maximum security.

At the age of 12, Villond started selling marijuana on the streets of Los Angeles. He later sold crack, joined a gang, and was making thousands of dollars per week in “fast cash.”

Throughout his teenage years, animosity brewed between Villond and a rival crew. They followed him home several times, flashed guns, and threatened his mom and others. One night, after they showed up at his then girlfriend’s home, Villond decided to take matters into his own hands. Furious, he grabbed his gun, drove to their hangout spot, and opened fire. He shot and killed one person and harmed two others.

While incarcerated, he contemplated suicide. Drugs are easily available in prison and Villond considered overdosing on heroin in his cell. But he had what he calls a “spiritual awakening,” in which he vividly saw his grandmother telling him that everything would be okay.

His grandmother passed away shortly thereafter, but Villond immersed himself in various spiritual traditions, including Ifá, a way of life that originated in Nigeria and includes the idea that “anything that’s mentally conceivable is physically achievable.”

He read hundreds of books and took personal-development and victim-sensitivity courses, in which he learned to take responsibility for the ripple effect of his actions as well as to gain an understanding of the conditions that lead to his lifestyle.

When asked about his release, Villond said, “it’s still sinking in as far as I’m actually free, that I’m not living in a cage anymore…I can walk on the beach and listen to the ocean, I can sit under a tree and feel the breeze, I can go to a park with grass and watch children play and laugh…I can’t really find an adjective to describe or express what it’s like to be given a second chance at life basically; it’s like I’m being reborn again.”

Since his release, Villond has been volunteering and mentoring people who were incarcerated on how to re-enter society successfully. An entrepreneur at heart, he’s been taking culinary classes and has a vision of starting his own food truck or bistro.